Lionel and Leona were playing soccer.

Theo’s pen falls on the floor and causes a chain reaction in the library, without him initially noticing.

When Theo eventually does notice, he is shocked. (He’d caught Cleo in his arms after she’d been thrown up into the air from the explosion caused by Bootsie Baboon’s maroon hot-air balloon having gone ka-boom; the ka-boom was because a monkey named McFloon that was on his lunch break had put a big hole in it after having been been flipped into the air by a board on a sawhorse thanks to Bootsie accidentally dropping a book he’d been reading from his basket onto said board.)

When Theo asks “Me?” a blast of “da-da-duh-da” (Beethoven's 5th Symphony) music is heard, and Theo asks Lionel “Did I cause that music, too?” and Lionel asks “What music?”

When Theo asks how what had happened was because of him, Cleo then proceeds to tell what happened through poetry form, which she calls “How the Baboon’s Balloon Went Ka-boom,” finishing with the fact that Theo put his pen on the top book of the stack while he pulled out Because a Little Bug Went Ka-Choo from the center of the stack. In Cleo’s words, that was “what caused all the hullabaloo”.

When Theo tells his side of what happened (also in poetry form), he realizes that Cleo’s story of what had happened was exactly as she had said: “And that’s how it happened/I guess that it’s true/Just because I pulled out Little Bug Went Ka-Choo.”

Leona then wonders how many dads would “go to so much trouble just to teach their cubs a lesson.” When Theo says “Well, uh...” Leona then adds “I am never going to forget that lesson” before saying to Theo “Daddy, you are so smart” and kissing him on the cheek (the latter of which makes Lionel smile). When Theo thanks her and says that it was a lot of trouble, he’s surprised at seeing the patrons agreeing with him on the latter point.

Theo then picks up the soccer ball and tells Lionel and Leona “Oh! Hey, why don’t you kids go outside and play some soccer while I deal with the mob?” As soon as Lionel and Leona leave, Theo quickly corrects himself while turning to the patrons, saying “Uh, patrons! Patrons! You’re patrons!” and then groans in embarrassment.

Cleo then says, “Oh, Theo — how many times have we talked about taking a book from the center of the stack?” and Theo shrugs.

When Cleo says she hoped he learned his lesson, Theo then says, “Well — ha — you’re never too old to learn, you know.”

However, Theo shows that he hasn’t learned his lesson when he says that what happened reminds him of a story, and tries to take another book from the center of the stack, and Cleo and the other patrons stop him from doing so, to which he asks “What?” 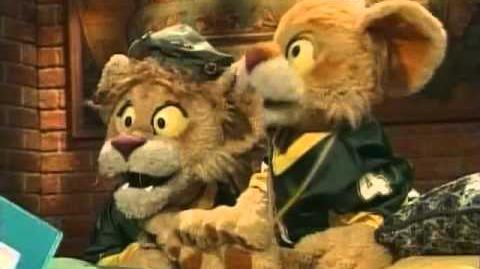 Retrieved from "https://betweenthelions.fandom.com/wiki/Episode_48:_Why_the_Baboon%27s_Balloon_Went_Ka-boom!?oldid=15139"
Community content is available under CC-BY-SA unless otherwise noted.