Clickety-Clack, Clickety Clack! (aka Clickety-clack, Clickety clack!) is the sixth episode of Season 2 of Between the Lions, and episode 36 in total.

Cleo reads “Click, Clack, Moo: Cows That Type” to Lionel and Leona before Leona interrupts and asks about the typewriter the cows are using in the story. Then Theo says he loves it when Cleo says “typewriter”, causing the book cart he was pushing to roll across the floor and crash off-screen; this prompts Theo to make a joke about how all those books were history anyway before laughing at what he calls “a little library humor”. When Lionel asks what a typewriter is, Theo explains that a typewriter is “a thing of beauty” and “a mechanical miracle”. Click, however, points out that the typewriter was a “mechanical miracle of its time — now sadly, gone the way of the dinosaur.”

Theo then says he wishes he had his own typewriter with him; then he could show the cubs how a typewriter works.

"Oh, I love it when you say "typewriter!"- Theo 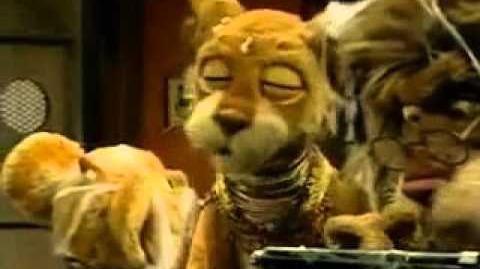