There's a Fly in My Soup is the 15th episode of Season 1 of Between the Lions.

The lions try to make Click laugh, but they made her cry instead until she swallows a fly.

The Universal Encyclopedia of Fly Jokes 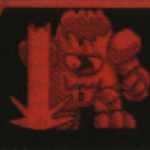