Between the Lions Wiki
Register
Don't have an account?
Sign In
Advertisement
in: Books, Stories, The Adventures of Cliff Hanger books,
and 2 more

Cliff Hanger and the Fuzzy Wuzzy Bear and the Big Wig

Cliff Hanger and the Fuzzy Wuzzy Bear and the Big Wig is a book from the The Adventures of Cliff Hanger by Livingston Dangerously. It's the 1465th adventure that teaches both the short "i" and "u" sounds.

Cliff Hanger hangs from a cliff and he can't hold on much longer. Cliff looks up and sees a singing a dancing bear (named Fuzzy Wuzzy) singing his theme song.

Cliff reads a page on his trusty survival manual (the page for Fuzzy Wuzzy the bear):

The bear does so and Cliff climbs it. Then Fuzzy Wuzzy the bear is able to pull Cliff up to safety. But before Cliff reaches to safety, the "hair" turns out to be just a big wig.

The narrator says, "It was only a big wig!". This causes Cliff to say, "Oh nuts!", and gets back to the cliff. Then he remarks the last lines of the rhyme, "Fuzzy Wuzzy wasn't fuzzy! Was he?!". He says the last part in the rhyme in a sad manner. To Cliff Hanger's rhyme, Fuzzy Wuzzy the bear (in response) taunts Cliff that he is a "baldy waldy". Then he teases Cliff that he missed the safety point (since the wig made him end up to where he started from). He calls himself that in sense that he has a bald head (a furless head). Since Fuzzy Wuzzy was a bear and had no hair, he was not fuzzy. Fuzzy Wuzzy says, "I'm just a baldy waldy!", then he dances away. When he does, Fuzzy Wuzzy is gone. Finally, Cliff is once again back where he started from. Then once again, he can't hold on much longer. 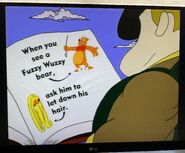